The Children's Gospel Box (CG Box) ministry was born out of the huge need
for children's materials and training around the world.

Birthed in 2002, the CG Box began as just a vision. For over forty years, Dr. Mary Lou Canata traveled across the United States and to foreign countries sharing the Gospel with children and encouraging children’s workers. Together with her talking puppet “Tommy,” Mary Lou visited small and large churches alike.

After retiring from her many years on the “field” and serving in the National Church Office of The Foursquare Church, she was looking for new places to serve as a volunteer when she was approached by Foursquare Missions Press Director Bob Hunt about the possibility of continuing to serve children, children’s workers, and the mission field as Director of the Children’s Gospel Box.

Although Foursquare Missions Press had been meeting the needs of missionaries and national leaders for over 25 years, there was an increasing need for children’s materials and resources to reach the poorest of countries.

From that meeting, the CG Box was born.

Its clear mission is to resource and train children’s workers in poorer countries and to involve as many children as possible here in the United States.

WHERE WE HAVE GONE

Our resources have been sent to…

Where We Have Gone
+

have received the gospel message

Where We Are Going

The Children’s Gospel Box reaching and discipling the children of the world with the Word of God.

The Children’s Gospel Box not only supplies children’s workers with numerous Gospel materials, but it provides extensive training for each recipient. There are various visual aids, along with enough evangelistic literature to reach 750 children.

For three days, CG Box trainers demonstrate each of the elements of the Box. Children’s workers then experience and participate in a children’s evangelistic rally.

The average cost for a Children’s Gospel Box training and resourcing is $7,625 per country. The cost per Box is $150 (includes materials and shipping).

What People Are Saying

"FMP’s Teddy Bear project has provided us a tangible way to share the love of God with the least and the lost. Our church has rallied around the idea of giving a “bear hug” to abandoned, trafficked and terminally ill children in Egypt and Nepal. Being Jesus with “fur on” is a great reminder of the comfort and love of our Heavenly Father."
Kurt Fuller Senior Pastor, The Warehouse 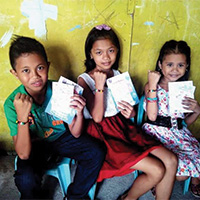 Because of the Children’s Gospel Box, we saw over 500 children saved and we will begin a new church…
Local Leader, Philippines